I repeat some the introductory blurb in case you haven’t read the UK version.

Lies, damn lies and statistics. So said somebody. Whoever it was, it is true. And there are liars, damn liars and politicians. That seems obvious.

But what about statistics? The first phrase was apparently popularised by Mark Twain in the United States. Benjamin Franklin wrote in a letter ‘…in this world nothing can be said to be certain, except death and taxes.’

So, whilst others have looked at infection rates, such as Andrew Mather to be found on YouTube, I decided that only death data would be reliable.

I consider Andrew’s work to be good and very thorough, but not simplified enough for idiots like me, even though I did statistics up to and including ‘A’ level.

But his point is, I believe, well made that the cases of coronavirus have taken to having a life of their own, as it were, and are wandering at will. They are therefore meaningless, and of no value in assessing what is truly going on.

Except for telling us that whoever is testing hasn’t got a clue as to what they are doing.

His website is Peerless Reads if you want to look.

Please note my article is primarily about numbers so we can compare to other years and diseases. People are individuals, precious souls, but we must look at the overall picture to understand what is going on.

Well, using this as a basis, I set out on my journey at the beginning of lockdown. I never knew all the truth it would lead me to.

This is as the title suggests, based on available U.S. statistics. I have kept it simpler than the UK as it seems less necessary at this stage. If anyone wants to help and tell me where to look for other suitable data, or where people have done analyses, that would be great.

a) The following gives the death rate per 1,000 with a useful graph indicating how death rates have changed over the years in various countries and the projected changes. Quite how they arrive at the projections I haven’t fathomed.

In any event, you can see that rates were falling in the U.S. but started rising in 2008 (hover over the blue line with the cursor). There was a significant and steep rise from 2013, 7 years ago.

Put crudely, deaths have been and are increasing year on year as the population get older.

As I understand it, the annual deaths for 2020 are still estimated.

b) The following is interesting.

A death rate that controls for the effects of differences in population age distributions, a value which indicates the risk of dying relative to a standard population.

The AADR is thought to be more efficient than crude death rates for comparing mortality of population groups with different age structures. From

The Wikipedia entry may help more.

In essence this means the older a population gets, the more people are likely to die, so I believe this is reflecting birth rates in the statistics. See

c) Therefore, deaths have been increasing, births falling, the population might be expected to reach a plateau, and stablise at current projections.

We would have expected more deaths in 2020 than 2019 and this certainly appears the case. Further data is required to be sure of overall deaths.

Please note San Marino is the worst and as far as I am aware has been at the top of the list for many months. It is very small or course, so any death impacts the rate significantly.

I believe the following link is probably the most helpful.

If you compare by states you get the following extracted from the 20th January 2021 figures. Total deaths since 15th Feb 2020 (fifth column from the left).

If you look at deaths per million you get the following (fourth column from the right):

The states change somewhat but the overall picture is similar. The rates per million are more reflective of impact in a general population of a set size.

Note top 2 for deaths run by Democrats governors in each case.

See this link for current governors.

The above average death rate shows 10 out of 18 Democrat run states out of 18.

The above average death rate shows 8 out of 18 Republican run states out of 18.

New Jersey and NYC combined 15% of all Covid deaths but states have 8.6% of USA population.

However, note the following:

Of the 18 states above the average death rate for the whole country, 141,935 deaths occurred in 10 states which are Democratic run.

Of the 18 states above the average death rate for the whole country, 52,378 deaths occurred in 10 states which are Republican run.

If you take the total deaths and look at those with above average deaths compared to the rest of the nation (50 states and Washington DC), I make it the following, republican as proportion of total deaths:

There are 16 states included, 8 to each party. 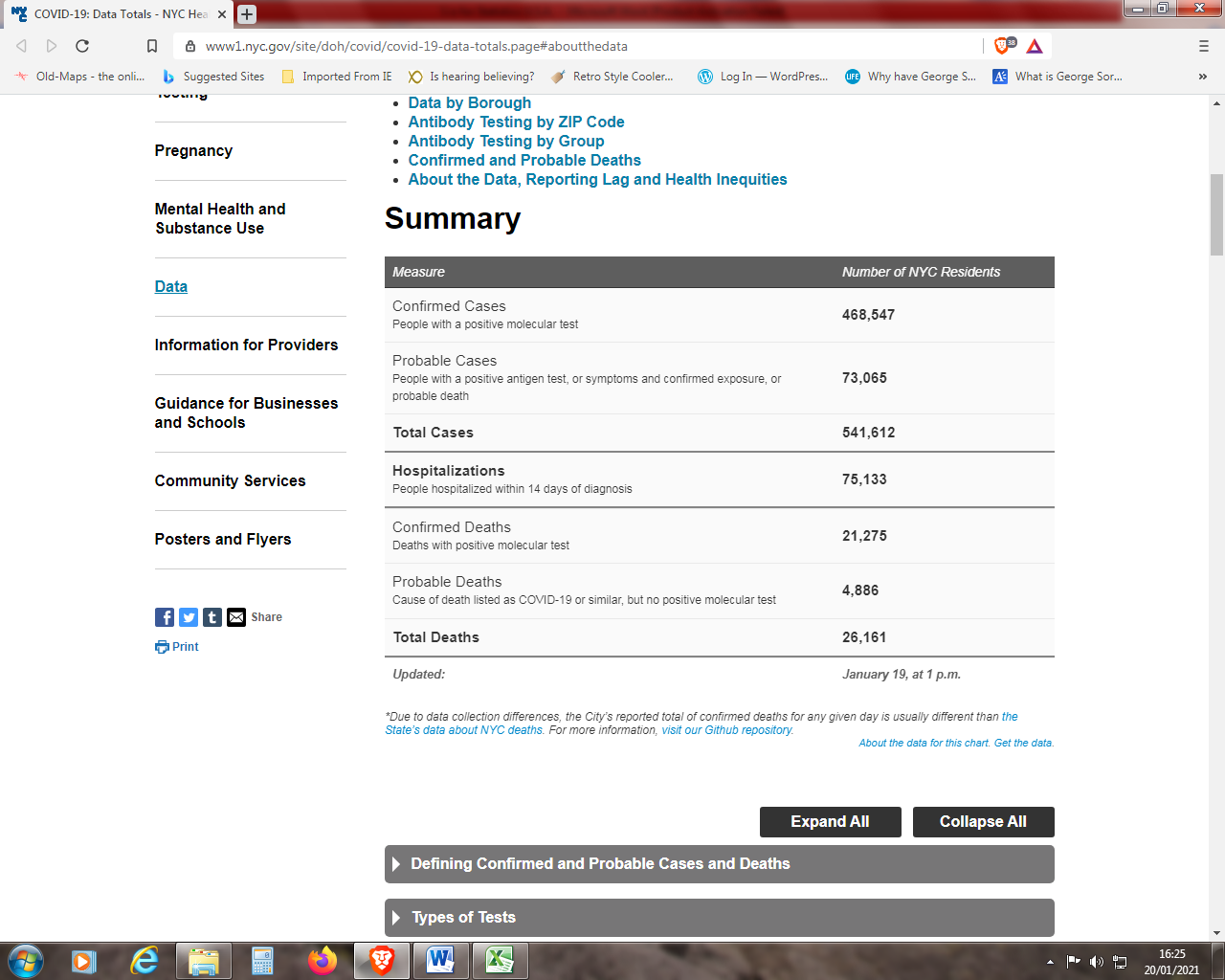 Which is approximately ¾ of all deaths in New York State.

Population is approximately 8,336,817 according to

This equates to 2.5% of the total population.

This makes the city just over 2 ½ times worse than its population would suggest it could be. Why is that?

It should be noted the mayor is a Democrat.

Bui it does also have a high BAME population. See heading below.

See the following for data on the city.

The following link should be noted. It appears that those with a darker skin are disproportionately affected.

Why are pacific islanders top of the list? Obesity is a reasonable cause, as can be seen in the UK also in the statistics as a related factor. See link below.

Why are darker skins affected? See the reference to ‘vitamin D epidemic’ in links below.

Lack of vitamin D recognised as an epidemic in the U.S.A. This is since 2005 according to the article in the link below.

And considered at pandemic levels worldwide as of May 2017. Primary link below, at U.S. government agency.

Sub link from above.

Note the age increases in the graph in following link. This is very similar to the UK. The vast majority are elderly.

‘CDC data also show that Americans, regardless of age group, are far more likely to die of something other than COVID-19.’

Note again the following for information on leading cause of death over the period going back to 1933.

Heart disease is first in every year and cancer is always in the top three of the leading causes every year.

It can be seen from all the above that the U.S.A. is not as badly affected as the Democrats and majority of the media in the states have alleged. They have either not done their homework properly or it has been deliberate and systematic.

They have blamed Donald Trump, but in reality dealing with Covid 19 has been in the hands of the individual states. The evidence shows that Democrat run states have done worse than Republican states, significantly worse.

Worst of all has been New York State and especially New York City, again run by Democrats.

Of course, the issues are that there is a vitamin D epidemic far more significant than Covid 19. This affects the darker skinned disproportionally due to issues location and ignorance as much as anything else.

We must note other issues such as heart disease and cancer are far more serious than Covid 19. And most of those dying were elderly, with a similar age

Sadly, too the elderly die, but we seem to have forgotten this for some reason. Perhaps it is our youth centred selfish culture that engenders this. Or just our generally increasingly selfish culture and deifying of the individual that has caused this.

Given that heart disease and cancer are far more serious issues why are you up in arms about Covid 19 and think that Donald Trump is to blame, whatever his other faults may be. Assuming you do blame Mr trump of course.

Why were you not up in arms about the other diseases which have been around for a very long time? Are you being hypocritical?

These issues have been known about for years, as some have been warning for a long time.

And why did not Obama and the Democrats get a handle on these matters when Obama was in power for 8 years?

There are serious questions to ask as to who is trying to kid us that there is not a serious issue of vitamin D deficiency. Could it be the big pharmaceutical industries that have vested interests in maintaining an unhealthy population so they can make money from selling drugs?

Do representatives/former employees of these companies dominate the advisory bodies and academic research?

Ask yourselves these questions and come back to me with answers if you have any.

Otherwise change your views on these matters and seek to do something about them for the benefit of us all as soon as possible.

Thank you in anticipation.

P.S. If you wish to know more about Covid 19 please go to Covid 19 Summary

If you are a Hitch Hiker’s Guide to the Galaxy fan then perhaps you noticed the reference to 42 % and republicans. Are they part of the answer? Well, you can answer that, but if you want to look at 42 try this.

42 – The Ultimate Answer to Life, The Universe and Everything